The new White Rock oral histories were deposited with West Glamorgan Archives Service on 1 October 2014. Tudor Price and John Ashley are seen with Archivist Katie Millien. Six hours of audio files and transcriptions are now available at WGAS as well as on this Oral Histories page. 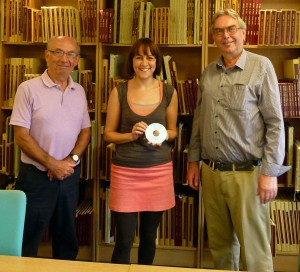 More oral histories are planned – there seems to be no end to the White Rock Ferry families and descendants! Watch this page for news.

Click on each name for the recording, summary, and in most cases a full transcription.

Many thanks to all the interviewees. We have made some good friends during the course of this work, and we hope everyone has enjoyed it as much as we have.

The team also summarised a number of historic recordings in the WGAS archive. These are of White Rock and more general interest.

Ken Frederickson helped to scull the White Rock Ferry boat which his uncle and grandfather worked between White Rock, Foxhole and the Lower Hafod on behalf of the White Rock Estate. The ferry was operated for the better part of 150 years by two families until 1942 and closed in 1945. The working of the ferry, its ferrymen and customers is described in detail within the context of life in general for children, residents and workers in White Rock, Foxhole, Pentrechwyth and Hafod.

Doris Baddick has lived in the Foxhole and Bonymaen districts of Swansea all her life and spent the years until her marriage in 1946 with her family in the Quarry Cottages (Samlet Row) at White Rock immediately overlooking the White Rock Works and ferry.

Her childhood experience, financial constraints of her widowed mother, social conditions in general on the East Side of the town and river before WW2 are amply described as well as war service at Cwmfelin Steel Works welding fuel cans, and her husband’s employment history.

Ian Smith is the Curator of Modern and Contemporary Industry at the National Waterfront Museum in Swansea.He was born and brought up in the Dublin Arms in the Hafod and had his first job at Yorkshire Imperial Metals. Later he was involved in clearing the Lower Swansea Valley.

Ian talks about his childhood in the Hafod, playing on wasteland industrial sites and in the river, and his early working life.

The time line has moved forward a little into the fifties. There is an interesting commentary on the Tinplate Mills at Dyffryn, serving in the Merchant Navy out of Swansea, and trade union agitation at Fords in the 1960’s. And there is a charming description of “dancing” 3 nights a week!

Two granddaughters of White Rock Ferryman and Fish and Chip shop proprietor David Clarke recall their father’s shift work on the ferry, particularly in the early years of WW2 and their childhood in St. Thomas and Kilvey. The Blitz and life in the Anderson shelter is remembered along with rationing and early working lives in Swansea.

Mrs Jones has had a fascinating and very long life, despite being diagnosed at an early age with a serious heart condition! This interview is riveting and highly entertaining.

Olive Clarke née Nicholls, the widow of the last White Rock Ferryman, describes her family experience with the ferry and its customers and characters. The good times and not so good are remembered and the social and community value of the ferry is amply described.

Olive Clarke’s story was recorded in 1995 for a Swansea Sound radio programme.

Historic recordings in the WGAS archive of White Rock and more general interest.

One thought on “Oral Histories”