On 2 April 2015 we cleared some of the excess vegetation from the river dock. Jean spotted differences in the structure of the dock walls and an underground stream emerging near the back of the dock. 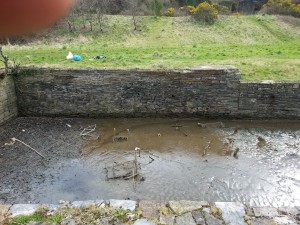 The dock was clearly built in three different styles at three different times. The earliest section, a single wall or quay, is made of mainly undressed stone. The second section extends the quay toward the river with a butt joint. The third section completes the other two sides of the dock and joins the quay extending north along the river bank. The two later sections are in different styles of dressed stone with some infill. 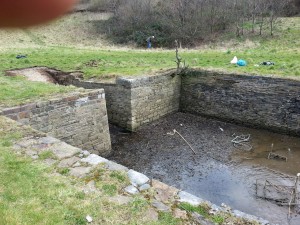 The east corner of the ‘ramp’ is square, the other rounded. The corners are not aligned. These may not be their original forms. 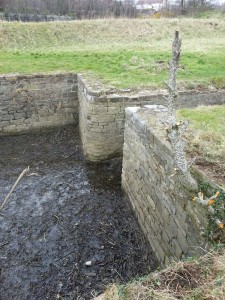 The 1736 White Rock lease mentions the state and use of the site at the time the lease was drawn up. I have highlighted evidence of existing structures pre-1736. These are the river dock, the ‘key’, the ‘ruinous’ corn mill, and some possibly derelict houses. It is not clear where the houses were but they would probably have been at or near White Rock on the east side of the river. There is no mention of a ferry. A large part of the lease is to do with giving Bussy Mansell a market and free passage for his coal, including use of the dock.

R.O. Roberts referred to the lease extensively in The White Rock Copper and Brass Works, near Swansea, 1736-1806, published in Glamorgan History Volume Twelve (1981). Roberts corrects some spelling errors and fills some gaps in our own transcription of the lease. The paper concludes with the next important White Rock lease in 1805, which as far as I know we have not examined yet.

Surveys of Gower and Kilvey was published in 1861. It reproduces the surveys carried out in the seventeenth century at the behest of Bussy Mansell and others. The Duke of Beaufort features prominently. There are two chapters on Kilvey, 1650 and 1688. Leaseholders, tenants and land are listed, but there are no maps. I haven’t worked through the survey in detail, but some of the place names in the leases do seem to be present. I have a (very large) pdf if anyone would like to burn some midnight oil.

History of the Port of Swansea (1922 and also on pdf) has various references to the roads, tramways, canals and railways along the Tawe as well as White Rock itself. They are not all accurate but make interesting reading. 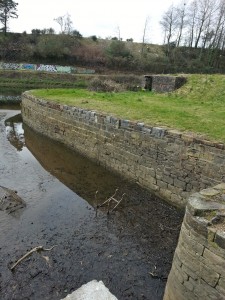 Where does this take us? The river dock was complete in 1736, not constructed when the works were built. It was modified over the life of the works, and indeed it temporarily disappeared on the 1897 OS map. The dock was constructed in three distinct stages, starting with what was probably the ‘key’. The dock was in use by Bussy Mansell for transhipment of coal before 1736.

The corn mill and its associated water supply from Kilvey Hill is already known. There may have been derelict houses on the site which were repaired by the White Rock lessees for their workers. They could have been on the site of later houses we know about. From photographs I don’t think any of the later houses date back to the early eighteenth century. It is possible some remains exist under the copper smelter locations, though it is more likely the stone was reused.

An underground stream runs into the dock.

One theory is that there was a small community at White Rock which was abandoned some time before 1736, possibly when the corn mill closed. A tributary may have run into the Tawe and the ‘key’ was built alongside it for loading coal-carrying vessels. At least one building would have been in use, for paperwork and sheltering from the elements if nothing else. The tributary was rerouted along the leet and to its current entry to the Tawe when the corn mill was built in the seventeenth century, leaving an inlet. The ‘key’ was then completed as a dock. Various timelines are possible.

The community may even have had a small boat-building operation, common in Welsh ports and rivers, but there is no evidence for this.

An archaeologist may be able to date the three sections of the dock. Research may identify places, individuals and businesses/occupations at White Rock in 1650 and 1688. The ferry may go back even further . . . Never-ending isn’t it!

Here is the river dock as it once looked, thanks the supermoon tide on 1 October 2015! 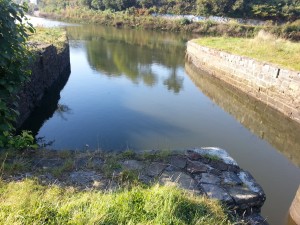 One thought on “River Dock”