The Connected Communities Exhibition opened at the National Waterfront Museum on 20th September, running  to 17th November. All six Swansea projects are showing their work in the White Wall Gallery (see the Links page for their web sites). Professor Jackie Eales, The Historical Association’s National President, attended prior to her Presidential Lecture the next day.

The BBC have created a gallery on their website that showcases the Connected Communities exhibit.

Colin James, Swansea Your Story, Swansea: A Town and City in Photographs. 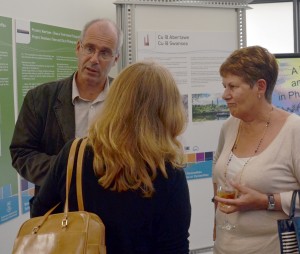 Huw Bowen, and Jean Round of Clydach (Photo Roy Kneath, Swansea Your Story)

There was no room for this heavy copper block at the exhibition, but it is too interesting an artefact to allow it to slip into obscurity in a dusty corner somewhere. It will soon be on display in Swansea Musuem’s Collections Centre at Landore.

The block is a manufactured alternative to brick – it is not just a piece of slag. It shows graphically how molten material like iron oxide was formed in a mould. We are sure it will strike a chord with many householders on the east and west side of the river who have block garden walls etc.

If your vegetables and flowers are sheltered by blocks like this do let us know via the comment box below.

Copperopolis casts light on the origin of the copper-slag blocks.

‘There was widespread use of one particular by-product of the copper-trade for building purposes: copper-slag blocks, cast from moulds positioned alongside the reverbatory furnaces in the copper refining process in order to receive the slag. Each of the successive copper-smelting centres in Britain used these hard durable blocks of hard glistening iron oxide as a building material. Their use may be one of the first of a manufactured alternative to brick in the construction of structures. The use of these new building blocks expanded as attempts at an alternative use by extracting the iron from this material failed; the blocks continued in use as an early type of large cast building-block.

‘It is not certain when these blocks were first cast. The hardness of the slag must have been readily apparent from the early days of large reverbatory furnaces for copper production, and it was only a matter of time before they were formed in to blocks suitable for building.’

Copperopolis, Stephen Hughes, Royal Commission on the
Ancient and Historical Monuments of Wales (2000).