The following story on the centenary of the last cavalry charge in WW1, and a related 1914 letter about an earlier charge by the 9th Lancers on August 24th, are from The Times on 6 September 2014 (Valentine Low) and 17 September 2014 (Court and Social pages).

“Francis Octavius Grenfell and his twin brother Riversdale Nonus Grenfell were both in the Lancers. Riversdale was killed in 1914 and Francis in 1915.

“They were the sons of Pascoe St Leger Grenfell and Sophia Du Pre (cousins!) and born in 1880.

“Neither brother (nor their father) had an active role in Middle Bank etc, being full time military, but both are remembered on the memorial tablet at All Saints Church Kilvey, separately and in larger lettering, left and right beneath the list of the fallen names.”

It was mad, dashing, glorious and ultimately pointless, and has gone down as an epochal moment in the annals of British military history. 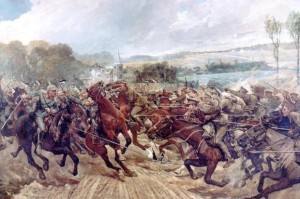 On September 7, 1914, British and German cavalry troops faced each other in the last lance-on-lance action of the war. It did not last long, just a quarter of an hour or so, but in that time the Germans were routed, the British commander, who as an amateur jockey had won the Grand National, was wounded, and a tradition of warfare that had lasted for centuries ended forever.

The action, which is being remembered tomorrow in a ceremony in France attended by the Duke of York, took place at the village of Montcel-Frétoy in the Battle of the Marne.

Lieutenant-Colonel David Campbell was leading two troops of the 9th Lancers when they were charged by a squadron of German lancers.

By all accounts, German lancers charged at a more sedate pace, at around half the speed of the British cavalry’s 30mph. The result was that the Germans did not stand a chance.

Frederic Coleman, an American journalist, spotted the Prussian Dragoons first. “Magnificent in the morning sun they rode, a solid line rising and falling with regular cadences as though mechanically propelled,” he wrote.

Then he saw the 9th Lancers, Colonel Campbell leading the charge, while behind him came “a scattered scurrying bunch . . . riding like mad, full tilt at the ranks of German pride and might bearing down upon them.”

Colonel Campbell, a supremely talented horseman who had won many races as an amateur — including the 1896 Grand National on the Soarer, the horse from which he gained his nickname — was wounded, and had to dismount.

Afterwards, the medical officer of the 4th Dragoon Guards, Captain Arthur Osburn, found him sprawled in a field of clover and treated him for “a revolver wound in his leg, a lance wound in his shoulder, and a sword wound in his arm”. Despite this, the colonel told the doctor: “I’ve just had the best quarter of an hour I’ve ever had in my life!”

On the British side, only four men were killed and eight wounded. One of the fatalities was Lieutenant F de V Allfrey who had been in charge of the machinegun and was on foot when killed. Later, the commanding officer of the 2nd Cavalry Brigade, General Sir Henry de Beauvoir de Lisle, came across one of Colonel Campbell’s men trying to straighten his lance. “Well, you got it in all right,” the general told him.

“Yes, sir, right through him,” the sergeant replied. “And look, there is even blood on me ’and.”

Terrifying though it may have been to face a cavalry charge with lances, in the age of the machinegun the death knell had been sounded for such an outmoded form of warfare.

Captain Francis Grenfell, of the 9th Lancers, a recipient of the Victoria Cross, wrote a few weeks later: “I am afraid all the cavalry traditions are for ever ended, and we have become mounted infantry pure and simple, with very little mounted about it.”

The lances may no longer be used in battle, but they still make ceremonial appearances.

“It is a great spectacle to see the regiment marching with lances,” said Lieutenant-Colonel Richard Slack, current commanding officer of the 9th/12th Royal Lancers.

“On Sunday that is what we are going to be doing. It is an immensely proud day for the regiment.”

Gallant charge of the 9th Lancers

We have received the following letter, dated September 11, written to a friend in this country by a corporal in the 9th Lancers, who took part in the now famous charge at Toulin on August 24:

He [the colonel] says that we have earned more honour officially than any other crowd out here, and a few have been recommended for the VC. It is impossible to give it all, but owing to fooling around and saving some guns and the 5th Infantry Division in the charge at Toulin in Belgium on the 24 of August, several have been mentioned in dispatches. Perhaps you have seen an account of the charge, or you have seen the letter I sent you about it. I cannot give detail now, but hope to live long enough to tell you personally. I had a charmed life — horse shot under me and my saddle blanket drilled through, & c. We are worshipped by the 5th Infantry Division and cheered by them whenever they see us. Unfortunately we lost several. Lieut Peek is missing and several of our troop. We rode absolutely into death, and the colonel told us this morning that onlookers never expected a single 9th Lancer to come back. About 400 charged and 72 rallied afterwards, but during the week 200 more turned up wounded and otherwise.

You see the Infantry of ours were in a fix and no guns but four could be got round, so the general ordered two squadrons of the 9th to charge as a sacrifice to save the position. It was magnificent but horrible. The regiment was swept away before 1,000 yards was covered, and at 200 yards from the guns I was practically alone — myself, three privates, and an officer out of our squadron.

Then the battery of four guns who had come to help us were out of action. The gunners were being mowed down. The 129th Field Battery were heroes to a man. Then we dragged their guns out of action and were finished.

But on retiring the guns got the range and stormed us for about two miles, and we lost heavily. A young chap in my troop had four horses killed under him within an hour. The escapes were marvellous. We had no sleep for four nights afterwards, and I was hardly sane. A peculiar feeling I had that we were returning from Waterloo.