John Vidal takes to the skies with US photographer J Henry Fair on an aerial toxic tour of south Wales – https://www.theguardian.com/environment/2016/oct/24/industrial-scars-landscapes-of-south-wales-toxic-j-henry-fair

Industrial scars: The environmental cost of consumption in pictures – https://www.theguardian.com/environment/gallery/2016/oct/24/industrial-scars-the-environmental-cost-of-consumption-in-pictures

There is nothing new under the sun (if you can see the sun). 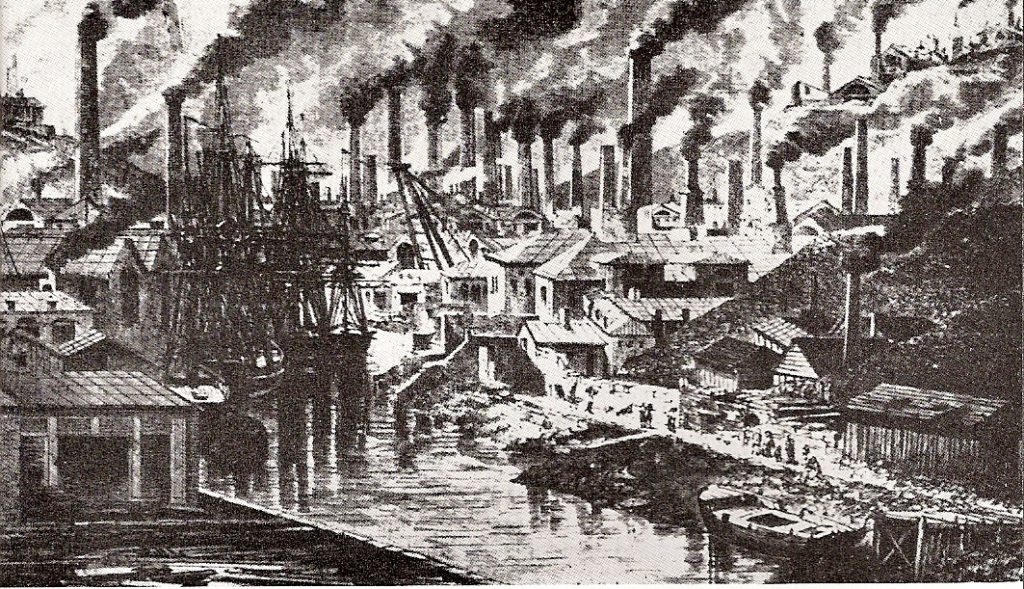 The Hafod and Middle Bank Works, c. 1840. Note the ships far up the river 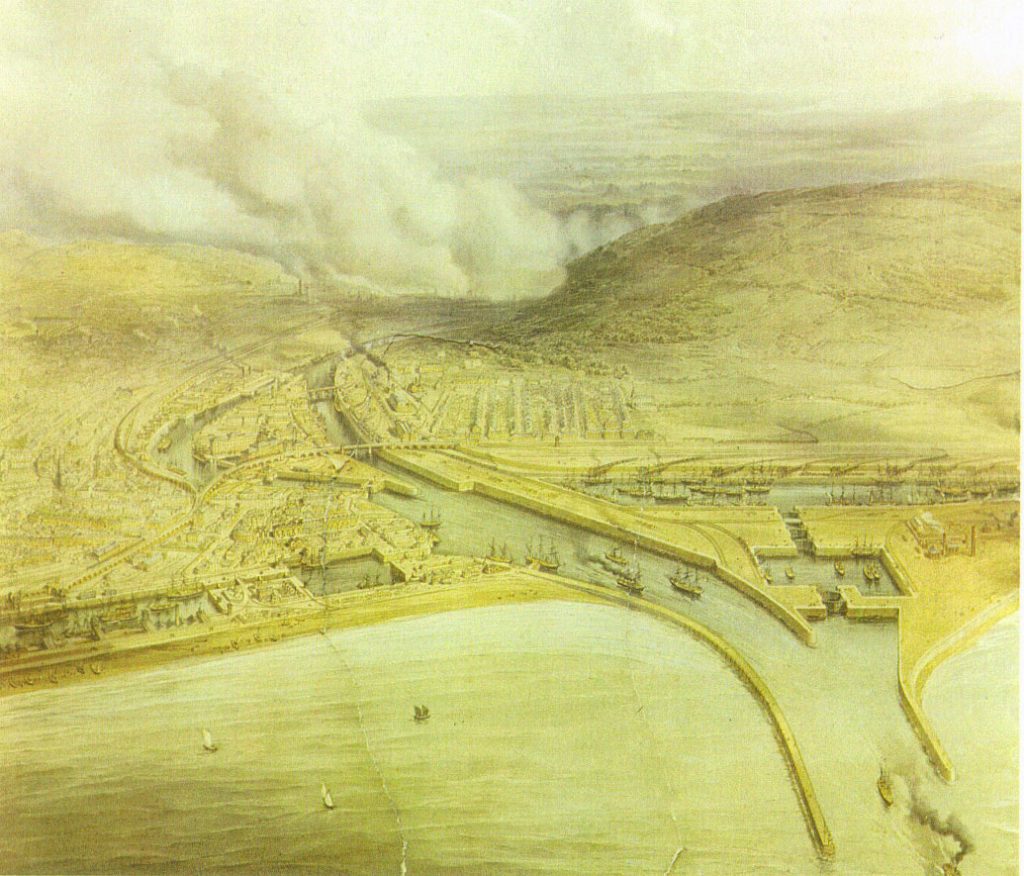 Lower Swansea Valley with the wind blowing unusually from the east

John Ashley will talk about the White Rock Ferries Families at Growing up in Victorian Swansea.

A history day presented in partnership with Swansea U3A and the  Historical Association, Swansea Branch, at the Waterfront Museum, Swansea Marina, on Friday 21 October, 11 am – 4.30 pm.

Entry is free. No need to register in advance but please don’t arrive halfway through a talk.

3.45    Leisure – Swansea Bay and the development of parks (Sarah Goodall)

Distinguished scientist, award-winning author and TV presenter Professor Richard Fortey FRS FRSL, will deliver the annual Old Dy’vorians Association Lecture at the UWTSD Dynevor Campus on 20th October at 7-00 pm.  Professor Fortey1 will be speaking about his new book, The Wood for the Trees2, published earlier this year.

“I had dreamed of having my own piece of woodland for many years, but somehow there was never enough cash in the bank. In 2011, thanks to fronting a BBC4 television series based upon one of my books, I was suddenly solvent enough to turn that dream into reality.  We purchased a small patch of classical beech and bluebell ancient woodland in the Chiltern Hills.

“I soon realised that to understand the natural history of the woodland we had to explore its human history. Far from being “wildwood” it had been managed by the same estate for nearly a millennium. The wood became a research project, and this talk summarises some of our discoveries: everything from geology to a ghost story.

“Now I have a clearer view of what makes “nature” in our small island. I have learned to see the wood for the trees.

Professor Fortey was Keeper of Palaeontology at the Natural History Museum, London and President of the Geological Society of London during its bicentenary in 2007.  In 1993, his first trade book, The Hidden Landscape, was named the Natural World Book of the Year.  He won the Lewis Thomas Prize for science writing (2003) and in 2006 won the Royal Society’s Michael Faraday Prize for public communication of science.

His eight major popular science books also include, Life: An Unauthorised Biography (1998), shortlisted for the Rhône-Poulenc Prize, and (2001), Trilobite!: Eyewitness to Evolution, shortlisted for the Samuel Johnson Prize, the UK’s most prestigious non-fiction award.  In 2005 Earth: an Intimate History was shortlisted for the Royal Society’s Aventis prize for science books. Life: an Unauthorised Biography was listed as one of ten ‘Books of the Year’ by the New York Times.  He has also written humorous books (sometimes anonymously) and comic verses about dinosaurs for children.

His many television appearances include: in 2012, the BBC 4 series Survivors: Nature’s Indestructible Creatures, which took a global look at modern-day species whose ancestors survived mass extinction events in the Earth’s history.  In 2013 he presented the BBC 4 programme The Secret Life of Rock Pools.  In 2014, he presented the BBC 4 three-part series Fossil Wonderlands: Nature’s Hidden Treasures, when he travelled to fossil sites to learn more about the distant past.  That year he also presented The Magic of Mushrooms, in which he showed that fungi (another major enthusiasm) had close but still poorly understood inter-relationships with plants and animals.  Earlier this year he presented the three-part series Nature’s Wonderlands: Islands of Evolution on BBC 2.

Lecture: ‘The Wood for the Trees’

Time: 6-00 pm (Complimentary refreshments in the Dynevor Cafe) for 7-00 pm (Start of Lecture in the Samuel Roberts Lecture Theatre).

Tickets:  The lecture is FREE.  No ticket required.

2016 is the 60th anniversary of the creation of the Gower Area of Outstanding Natural Beauty, the fist AONB in the UK.

To mark and celebrate this event the Gower Society and the Gower Landscape Partnership have organised a Gower Archaeology Day when archaeologists, historians and landscape managers will trace the story of Gower’s past from the Stone Age cave dwellers to 18th century Swansea, reveal how new knowledge is gained and, with this improved understanding, how we are all better able to manage and protect Gower’s rich heritage – our legacy!

The event is from 9am to  5pm on Saturday 12 November at The National Waterfront Museum, Swansea. For further details here.

Transform how heritage engages young people with an ambitious, youth-focused project. You can apply for a grant of £500,000-£1,000,000 as part of a consortium.

Andrew McKay & Carole Etherton invite you to come and join us on our next song and music trip aboard Copper Jack on Sunday 16th October 2016.  All aboard by 3.45pm for 4pm sailing.  Bring your voices and instruments to make music as we cruise on the River Tawe for an hour and a half and then have more music until 6.30 while moored in Swansea Marina outside the National Waterfront Museum.

Cost is £5 per person.  Places are limited so please book early.

To find out more details and make a booking please visit our website: http://copperfolk.wixsite.com/copperfolk

The Royal Institution of South Wales is collaborating with the Swansea Branch of the Historical Association for the second year to present History Day.

11.30:    Jeff Childs: The Parish Churches of the Lordship of Gower

Friends of Hafod Morfa are planning a litter pick and weeding session at the Hafod Morfa site from 9:30 – 12:30 this Saturday 16 July.

You might like to come for the whole thing, call in later, or head off earlier, according to your schedules but you’d be made very welcome. Bring your gardening gloves and gardening tools of choice – the Friends will bring the litter picking gear from Keep Wales Tidy. Look forwards to seeing as many of you as can make it.